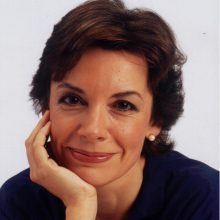 How do you research your books? Michelle Paver has written eighteen novels, including the bestselling Chronicles Of Ancient Darkness. She’s encountered killer whales, wolves, polar bears and a runaway Yak, all in the name of research.

Michelle Paver has written eighteen novels, including the bestselling Chronicles Of Ancient Darkness series. More recently, she has turned her hand to writing chilling ghost stories and her latest, Thin Air, is set in the Himalayas. Michelle’s books always benefit from her rigorous research and she’s been known to swim with killer whales, run with wolves and encounter polar bears, all of which enriches her books. We spoke to her on the eve of the publication of Thin Air…

What’s the key to giving readers the chills?

I re-read M.R. James. He studied ghost stories to see how it was done, so I studied (his writing), and I think there are several keys, and I think you’ve got to get them all in perfect balance. One of the things you need to have is a very realistic setting. Atmospheric, obviously. It could be unusual, it could be not so-unusual, but it’s got to feel real. You’ve got to make the reader believe in the setting so that then they’ll believe in the haunting.

Your ghost has to have an intention. Personally I think they should be malevolent, but that’s just a personal preference.

You need to suggest, rather than in-your-face horror. Corner of the eye stuff. That’s where ghosts breed. It’s in the shadows. In the reader’s imagination. I think it works better if you have a progressive haunting. You start with little hints that something is not right,  and then it gets more and more into the foreground, but still just using suggestions. You need a good story. You need to keep turning the pages. Imagine a whole load of plates spinning on poles. You’ve got to keep that all in balance. If one of them drops, your ghost story is going to fail. Personally, I think it’s the hardest thing to write. Dark Matter was the hardest thing I’d ever written… until I tried Thin Air. Because there you’ve got a mountain, I’ve got to make it very easy to understand the mountain’s topography, and because I can’t understand descriptions of mountains in books, I just glaze over.

Research: When Google is not good enough

I don’t try to put myself in danger, and I confess I’m not a mountaineer, so I did not climb Kangchenjunga, which is only a few hundred feet lower than Everest, and yes, some of my research is library-based, but I don’t use Google. It just doesn’t help me, except maybe to check out travel arrangements. With Thin Air I wrote pretty much the first draft, but felt that I really had to go there. I have been up mountains before, but I couldn’t use those. I needed to go to the Himlayas. I needed to hike through the foothills. As it turned out, the trip I was on was an eight day hike towards Kangchenjunga, going from about six thousand feet to about fifteen thousand feet. Enough to experience altitude sickness.

Sadly I didn’t (get altitude sickness), which was annoying. I would have liked to have done that.

There’s nothing like experiencing a steamy malarial jungle, or a swaying suspension bridge, or a yak who’s just lost his horn, or a blizzard sent by Kangchenjunga and you’re in this icy tent on your own, you can hear your breath, it’s dark, you don’t know what’s on the other side of the canvas… That’s what brought it alive. One can just tell. When I rewrote it after the trip, it was completely different from the version I had written before. It’s not just about getting facts right, it’s gave me ideas and brought the thing alive.

How to avoid getting bogged down in research:

I find I have to do some research (beforehand). I had to do some to choose my mountaiNick: was it going to be in the Andes or the Himalayas? Which mountains? And then reading about the old climbs on Kangchenjunga gave me ideas. You can end up with masses of stuff, and how do you make a choice? And that is always difficult.

While you’re writing, go and do the main research, because that’s when you know what you zero-in on, because otherwise you’ll waste a lot of time.

What can you expect to get from research?

I hope to get surprises. Some of it is just location stuff. If you imagine a mountain, in my mind it’s just a sort-of white triangle, but then actually seeing them gives you much better ideas for locations. Tastes and smells. Just surprising things that you didn’t expect. Being in that frozen tent, I hadn’t realised how scary it can be. One night one of the yaks ran amok through the camp and I was really sleepy, thinking ‘Oh, it’ll be fine,’ and then I thought if one of these things tripped on the ropes and pegs and falls on me I’m going to be dead! And that’s a mini-episode in the story. I could not have thought of that. You can’t make that up from the internet.

I’m not a technophobe! I have used the internet, y’know, I was using email when I was a lawyer in the City, and that’s partly why I don’t have it, because it’s just such a distraction for me. I even silence my mobile phone, so I can’t hear the ping of a text. My computer is about eighteen years old, and it’s Wordperfect 5.1 in DOS, and I save my work to floppy disks. The basic thing is it works for me. It’s just a tool. I love the computer, but I always write the first draft longhand. It’s just that bit freer for me. It’s also a question of habit. If something’s worked for you, you get a little bit superstitious, so I’m going to stick with it.

On starting out as a child:

I was five years old. In those days it was typewriters, I would bash them out on my mum’s typewriter. I never thought at that time that I wanted to be a writer. Even at school, I didn’t think I was going to be a novelist. I didn’t think like that. I just wrote school plays and bullied my friends into acting in them. I was at university when I found a Mills & Boon (romance novel) in the library, and I thought ‘I can write one of these. Easy. No problem.’ I’d never read any. So I bashed out one in three weeks, sent it off, ‘Please publish it,’ and they sent it back and said ‘No.’ Quite rightly!

I was the typical arrogant student. I thought ‘I’ve read lots of books, therefore how hard is it?’ And that’s what started me on the usual thing of trying to write and getting rejected. One of the first books I tried to write was about a boy and a wolf, and I kept it. It didn’t get published, it was set in Viking-age Norway.

So, moral of the story is: keep your old manuscripts. Twenty-three years later, I found something in that, and that became Wolf Brother.

Did she ever consider giving up on the writing?

Oh no. It was the other way round. I had tried to write at university, then I became a lawyer, and anyone who works in the City will know, you’re working weekends, late nights. I was trying to fit in the writing. And then it was a question of, after thirteen years, thinking I’ve got to chuck it in, otherwise I’m not going to get a chance to really have a go at the writing and see if I can do it. So, I just took a deep breath and resigned.

No regrets. never. Not for a nanosecond. Sorry, any lawyers out there!

At the risk of sounding like an English teacher, rewriting is the most important part of it. Good books aren’t written, they’re rewritten. Even if you love it, just look a bit critically at it and rewrite until you’re really happy with it, and then submit it. And keep writing. I reached a point when I was a lawyer when I was still trying to write, and one weekend I thought no one’s going to blame me if I don’t write, if I stop, but if I stop writing I will have a one hundred percent certainty that I’m not going to get published. If I keep writing, I’ve got a tiny, tiny percentage chance of getting published. Does it matter enough to devote all my spare time? And, yes, of course, it did. The thought of having one hundred percent certainty of not getting published was just too ghastly to contemplate. So, if you keep writing, you give yourself a chance.

EP392: David Lee Stone — No One Tells You When You’re Done

EP392: David Lee Stone — No One Tells You When You’re Done