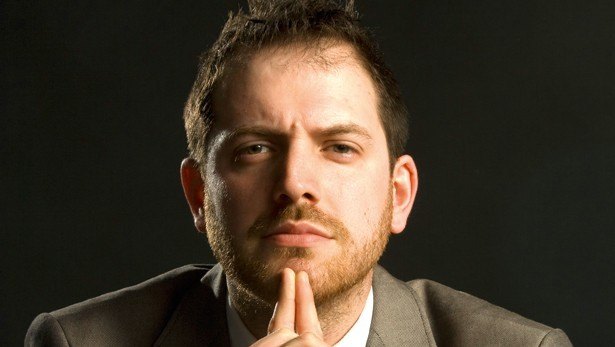 Joe burst onto the fantasy scene in 2003 with his debut The Blade Itself. His books have climbed high up the Sunday Times and New York Times bestseller, and he had some unusual advice for writers when we spoke to him at GollanczFest.

Joe Abercrombie is a British fantasy writer and author of The First Law trilogy and other related works of fantasy. In 2014 he published Half a King, the first book in his new Shattered Sea series, which won the 2015 Locus Award for best Young Adult book.

Click to Tweet: “The longer you dance naked in the rain, the more chance you will be struck by lightning,” Joe Abercrombie @bestsellerxp @LordGrimdark

Joe burst onto the fantasy genre scene in 2003 with his debut The Blade Itself, which is now published in thirteen countries. Since then he has continued writing in the First Law universe, and his second standalone book in the series, The Heroes, reached number 3 in the Sunday Times bestseller list, and his third standalone Red Country was both a Sunday Times and New York Times bestseller. He’s also written a Young Adult trilogy called The Shattered Sea and his most recent work is a collection of short stories from the First Law called Sharp Ends. We caught up with Joe at GollanczFest, where he gave some unusual advice for writers and fans of nudity…

I’m not really a natural short story writer. My first few books were all big, long stories, as fantasy books often are, but I was approached about the possibility of contributing to a couple of anthologies, and that seemed like a good idea, and so I started writing short stories for that reason, really.

There is a certain kind of short story, the classic short story, a beautifully self-contained episode with its own twist, and its own comment, and its own theme. That’s a particular art form that I’m not sure I have. I tend to do more individual scenes that hopefully have a twist and a point to them. I can explore a lighter tone, which I like and don’t normally work in. A different tone, a different set of characters, different situation, and ones that intersect with familiar characters and places, and  hopefully readers who have read the books will find some (new) little corners explored.

I’m not someone that believes that art and commerce have to be in opposition. I think the best art often results from a lot of commercial constraints. I think you can see the difference between the first three Star Wars films — where there were all kinds of creative constraints of time and money and what could be done technically — that produced far better, disciplined filmmaking than when you could do anything you wanted with the second trilogy. Often those commercial constraints and those thoughts of ‘What’s going to work for my audience?’ help to channel and discipline what you want to do. I don’t think it means that you’re always asking yourself ‘What will the audience like?’ You’re not aiming for the lowest common denominator, you’re still aiming to please yourself and to try and be edgy and do something that doesn’t pull punches. At the same time I like things that are broadly, relatively commercial. I’m not into obscurantism, ‘Some people like this, therefore I can’t… because I’m too clever for that.’ I like to write things that I want to feel that are things that readers would like.

There are times, when I’m on holiday, or weekends, when I’m not always going to manage it, but usually if I’m in the midst of a book I’ll manage between one or two thousand words a day. That’s what I’m aiming for if I’m drafting. And then at the weekend I’ll usually manage to find time to do a few hundred, usually to top up a couple of days where I’ve fallen short, generally. So I’m aiming to do six to ten thousand words a week. I try to resist the temptation to think of writing as something very creative and terribly mysterious and magical, and try and look at it as work. In the end it’s easy to write and make progress when you’re feeling inspired, but that won’t happen always. Inspiration will get you through your first book, your first three books, and then you reach a point where inspiration inevitably withers a little — you still have your moments — the craft and dedication and good old British values of hard work have to come to the fore, and you have to find a way to make progress every day, even when you’re very down on what you’re doing and when you’re not feeling terribly into it, you’ve got to keep on grinding away. It’s about that chair time.

What marks the professional, I guess, is that ability to make progress when you’re not feeling that inspired.

I’m not terribly regular in that sense. Usually I have some bits going on in the day: my children go off to school, and they come back at three or four and it becomes a bit harder to work when they’re around, and I get dragged into things. It’s hard to be fully disciplined, on the clock, in that way. When I’m really into a book and things are going well, I’ll do a session in the morning and then I’ll keep dipping in for an hour, hour-and-a-half, chunks throughout the day, and probably write a little bit when everybody’s gone to bed. I’ll be working at an extremely inefficient and unproductive level all the time, rather than compartmentalising and effectively using my time.

Social Media And Other Distractions:

Very few writers are made or broken by their social media presence. Being good on Twitter is not going to sell really bad books, and likewise being terrible on Twitter isn’t going to spoil the career of someone who writes great books. In the end it’s your books that are the thing. But if you enjoy having some contact with your readers, which is nice to do, writing can be quite a lonely profession, you sit there wrestling with your demons, so it’s nice to have some contact with people and to remember there are people out there who enjoy what you do. I don’t think you should see it as work that needs to be done, insofar as you enjoy being on Twitter and being involved with other writers and readers, it’s a good thing to do.

Advice To His Younger Self:

It’s turned out very well in hindsight. At the time there was a period when I was trying to get published and I was submitting to agents and being rejected and that was very hard, and you do constantly ask yourself ‘Is this good?’ To be a writer you need this towering self-confidence that says what I’ve got to say is interesting, that I can fascinate someone with this story to the point where they’ll want to give me money for it. That’s a real arrogance you need to do that. And, at the same time, you’ve got to have a certain degree of self-doubt so that it doesn’t become a completely self-obsessed thing and that you have the doubt to go over and over things and refine them and revise them and learn and improve. You’re constantly trying to keep those two things in balance when you’re submitting to agents and publishers, and if you’re getting rejected — which all writers do, after all — it can be hard because that doubting part of yourself will grow and be fed. So I’d tell myself you’ve got to keep bashing away and keep trying to be as confident as you can and persist and hopefully things will pay off.

It’s always a strange stroke of luck that brings any writer a deal, but the longer you dance around naked in the rain the more likely you are to be struck by lightning.

Advice From His Mum:

The one piece of advice that really stood out for me was from my mum, because all the best advice comes from mum, and this was when she first read some of my work — I finally plucked up the courage to show my mother my work — and many people will say don’t trust the opinions of your parents because they’ll always say it’s wonderful… Not my mum. The most savage of critics, is my mother.

She said you’ve got to be honest. Always. You’ve got to be truthful — and this was some clichéd shite I’d put down — and she said any metaphor you write, rather than reaching for the easy cliché, ask yourself ‘Is this real? Is this true? Is this the way the thing really looks? Is this the way the thing really feels? Don’t just reach for a thing that sounds clever or fits the rhythm. Reach for the thing that is true and genuine. And apply that to everything; the way things look, the way things feel, what the characters say. Would someone really say that thing? Is this the way people really speak?’ And if  you’re always asking yourself, ‘Is this true?’, hopefully there’ll be some kind of spark of honesty there that can make the most clichéd scenes seem truthful all over again. Because often, I think, people don’t want things that are new, necessarily. They want the familiar told in a new way, they want the familiar with an authentic voice. Originality can be very overrated, I think. It’s like curry powder: a little goes a very long way.

Find your own voice. Honesty, again, is connected to that. Don’t write what you think people want to read, don’t write something that’s like something else. Try and find your own voice and say what you genuinely think. Don’t say what you think you’re supposed to think. What I react to when I read a book, when I find myself really enjoying a book, is that voice, that authenticity, that sense of someone describing something, saying something in a way I would never do myself that feels entirely real and believable. A vivid voice is what I always react to, and in the end that’s more important than any of the details of what your story is or the kinds of characters you’re writing about, it’s that sense of being talked to by someone fascinating.